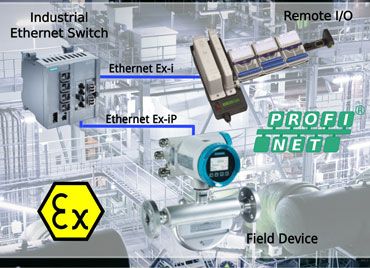 Ethernet suitable for deployment in hazardous areas, even including power supply for devices, interoperability with various manufacturers ensured, all without a tedious process of intrinsic safety certification – not possible so far? Working with the German National Metrology Institute (PTB), R. STAHL, Siemens and other partners are determined to turn this into reality. Already widely used in factory automation e.g. in the shape of PROFINET, Ethernet is now also becoming increasingly popular in process automation. Compared to analogue 4…20 mA signals, HART technology or current two-wire fieldbuses such as PROFIBUS PA or Foundation Fieldbus H1 featuring 31.25 kBit/s, the advantages of Fast Industrial Ethernet with a bandwidth of 100 MBit/s are strikingly impressive. However, unlike in manufacturing, explosion protection requirements abound in process plants. While there are solutions for Ethernet in hazardous areas, e.g. Remote I/O systems using fibre optic lines, there is no standardised intrinsically safe solution to match those available for fieldbuses.

A PTB-led team is therefore now working to specify intrinsically safe Ethernet, hoping to keep as closely as possible to the established IEEE 802.3 Ethernet standard. Aside from applications already possible today, future approaches revolving around the “Industrial Internet of Things” concept are to be taken into consideration as well. Within this framework, the working group has now defined two models for intrinsically safe Ethernet: “Ethernet Ex-i”, which enables transfer rates of up to 1 GBit/s with separate energy supply, is suited for complex devices. “Ethernet Ex-iP” is the designated choice for simple field devices. Much like two-wire fieldbuses, intrinsically safe power supply for field devices takes place via Ethernet cables suitable for full duplex 100 Mbit/s communication, so there is no need for separate supply lines. Besides conventional intrinsically safe supply, a so-called pseudo-linear-source (“F4-i“) can also be used for supply. This enables an intrinsically safe feed of up to 4 W net power to a connected device.