The vision of an “Industrial Ethernet down to the sensors and actors” has become reality. At the Achema fair in June 2021 Ethernet-APL was introduced. This technology is based on a 2-wire Ethernet that conveys information as well as energy to the sensors and actuators of the automation system. Ethernet-APL is based on 2-wire Ethernet standard IEEE 802.3cg [1] running at 10 Mbit/s.

Figure 1 shows the ISO/OSI protocol stack of Ethernet according to ISO/IEC 7498-1 [4]. It can be seen that Ethernet-APL resides at the layer 1 of the protocol stack, the physical layer. This is also indicated by the abbreviation chosen: APL stands for Advanced Physical Layer. It can also be seen that Ethernet-APL is one of many other physical layers, used for Ethernet and that the physical layer can be used independent of the other layers above. Therefore, Ethernet-APL can be used with any Ethernet based protocol, e. g. in combination with EtherNet/IP, HARTIP, OPC UA or PROFINET. 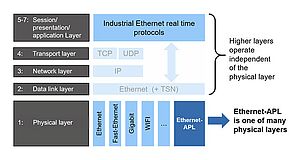 The design of Ethernet-APL follows the requirements defined in the NAMUR recommendations NE 74 [5] and NE 168 [6]. With the Ethernet-APL physical layer, the cooperating standards development organizations (SDOs) defined a communication solution to meet the needs of the process industry for a converging network architecture in the automation domain supporting the following features: 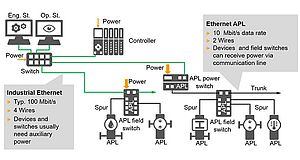 The supported Ethernet-APL cable is a balanced, shielded twisted-pair cable with a characteristic impedance in the range of 100 Ohm ± 20 % in a frequency range of 100 kHz to 20 MHz (measured according to ASTM D4566-05 [7] or equivalent international standard) as typically used for PROFIBUS PA and FOUNDATION Fieldbus H1. Wire diameters can be in the range of 26AWG (0.14 mm²) to 14AWG (2.5 mm²) either with solid or stranded wires.

The reference cable type for Ethernet-APL segments is fieldbus type A cable, MAU types 1 and 3, as specified in IEC 61158-2 [8]. This cable meets the requirements for intrinsically safe applications as described in IEC TS 6007947 [9] and may be used in non-IS applications as well. A detailed specification of the cable parameters can be found in the Ethernet-APL port profile specification [2], defining four cable categories (I to IV). A cable with the category IV will allow trunk lengths of up to 1 000 m and spur lengths of up to 200 m. In case a powered trunk is used, the maximum trunk length also depends on the voltage drop across the cable. Shorter distances have to be expected in this case for trunk cables. Best practice examples for a powered trunk can be found in the Ethernet-APL Engineering guideline [3].

In case using an already installed cable infrastructure, it is mandatory that the performance of the data transmission is ensured. An examination shall be performed according to ISO/IEC 11801-3 [10]. Usually, this task is performed with a measurement device that supports the measurement of the specific cable parameters. While for trunk cables the insertion loss limit values of [10] shall be used, for spur cables a correction factor of 0.2 shall be applied to the insertion loss limit values of ISO/IEC 11801-3 [10] to reflect the maximum 200 m spur cable length in comparison to the maximum 1 000 m trunk cable length.

The standard IEC 61156-13 [11] will specify a single pair cable for 2-wire-Ethernet with solid wires, but the standard is still under development. An additional standard for stranded wires will follow. Currently no firm statement can be made about the usability of cables for Ethernet-APL according to IEC 61156-13, but a large number of existing cables today meets already the requirements of Ethernet-APL. Information with respect to the applicability of this standard will be given at later point in time. The Ethernet-APL port profile specification [2] defines the following connection technologies for Ethernet-APL devices 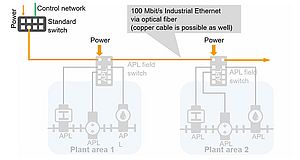 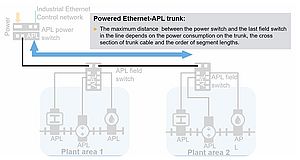 An easy to use explosion protection concept is key for application of a communication technology in areas with explosive atmosphere. Comparable to the known FISCO concept for classical fieldbuses, an intrinsic safety concept has been developed for Ethernet-APL. This concept is called the 2-WISE concept (2-wire Intrinsically Safe Ethernet) as defined in IEC TS 60079-47 [9]. It defines universal intrinsic safety parameter limits for equipment used in Ethernet-APL powered spurs. Figure 5 shows the setting for the 2-WISE approach. An intrinsically safe powered 2-WISE spur may comprise an intrinsically safe power source, provided by a switch, an intrinsically safe load port, provided by a field device, and a maximum of two auxiliary devices (e.g. surge protectors). All used equipment must be certified according to 2-WISE. The cable used to connect switch, field device and auxiliary device to a spur may be up to 200 m and must follow the following specification:

A powered 2-WISE spur shall be considered intrinsically safe, if one 2-WISE source port, one 2-WISE load port and up to two 2-WISE auxiliary devices are connected with a cable with a maximum length of 200 m. The cable shall follow to the specification above. The level of protection of the system is determined by the 2-WISE port, with the lowest level of protection. The 2-WISE devices are marked with “2-WISE” and the protection class. After consideration of the intrinsically safe spurs, now the connection between the field switches shall be considered. With reference to the different network structures, described in chapter 3, corresponding explosion protection concepts can be derived. 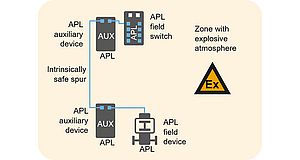 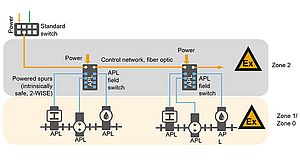 If the field switches shall be located together with the field devices in Zone 1, an alternative structure can be used. Figure 7 shows a topology that uses the powered Ethernet-APL trunk. The topology has the following features:

Other configurations are possible. Please refer to the Ethernet-APL Engineering Guideline [3] for further information and the application of these concepts for the US market using classes and divisions according to NEC 500. 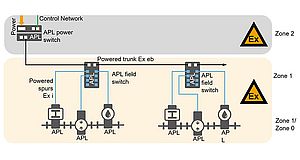 Ethernet-APL uses Ethernet data frames to communicate the measurement values. The minimum payload of an Ethernet data frame is 46 bytes. Smaller payloads will be padded to achieve the minimum payload size. The following estimation assumes that the measurement values of a typical Ethernet-APL device fit into the minimum data frame, even if multivariable transmitters are used. Therefore, a data frame of 46 bytes payload is assumed for the following calculations. By using this assumption, the network load shown in Figure 8 can be derived from the number of devices and the update time of the devices for up to 50 devices. 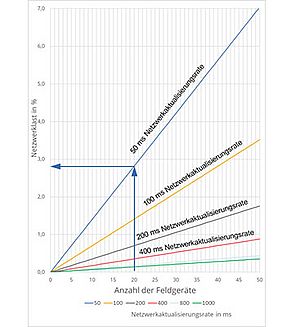 Figure 8: Network load estimation up to 50 devices for 10 Mbit/s Ethernet-APL

The network load can be verified as follows: It is assumed that an Ethernet-APL network will run on an network update time of 50 ms and that 20 sensors are connected to the network. In this case we select 20 devices on the x-axis of Figure 8. The blue curve (50 ms network update time) has to be selected in this case. The network load can now be read from the y-axis. The value is around 2.8 %. This is the total network load of sensors conveying data to the controller, respective the power switch (inbound traffic). As Ethernet-APL supports full duplex communication, at the same time data traffic from the controller to the actuators (outbound traffic) is possible. The calculation principle for inbound and outbound traffic is the same. It can be seen that network load only becomes an issue, when fast network update times are used. Typical update times in the process industry (100 ms … 1 s), will only cause small network loads, even with a larger number of sensors on a single network. For example: 150 devices with an update time of 1 s cause a network load of 1.1 %. This leaves sufficient bandwidth for acyclic data transfer for configuration, diagnosis and asset management. The detailed calculation of this example can be found in the appendix of the Ethernet-APL Engineering Guideline [3]. Even if Ethernet-APL provides sufficient bandwidth in typical applications, appropriate traffic prioritization support is required from protocol layers 2-4 to ensure that real time communication is not disturbed by acyclic data transfer. 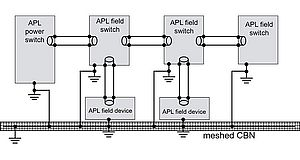 Figure 9: Cable shield connected at both ends to the CBN

In casea meshed CBN is not available or in case the potential equalization system suffers from vagabonding currents, cable shields should only be connected at one end directly to the CBN and via a capacitor at the other end, as shown in Figure 10. 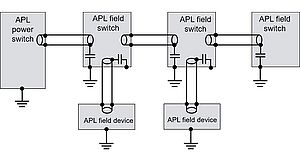 Figure 10: Cable shield connected with one end directly and the other end via capacitor to the CBN

Ethernet-APL field devices support direct shielding. Ethernet-APL switches support both direct and as an option capacitive connection of the cable shield to the bonding network. Note that the connection of the cable shield via a capacitor reduces the immunity of the cable against magnetic fields. Magnetic fields are for example generated by unshielded power lines that carry currents above 50 Hz (e.g. lines that connect a motor to a frequency converter). To compensate for this, the minimum distance between the Ethernet-APL cable and the power cable should be increased.

According to IEC 60079-14 [14], grounding the cable shield on both sides in the Ex area is only permissible if “it is highly ensured that potential equalization exists between each end of the circuit”. If the currents in the equipotential bonding cannot be minimized, i. e. the equipotential bonding is not ensured to a high degree, the current flow from the equipotential bonding via the shield must be prevented. The IEC 60079-14 [14] prescribes in this case a one-sided shield connection or two-sided shield connection with capacitor at one end, which reduces the effectiveness of the shield. Nevertheless, also with capacitive shielding, the devices will meet the usual EMC requirements. If necessary, this disadvantage can be compensated by increasing the distance between the Ethernet-APL cable and the power cable that carry currents above 50 Hz (e. g. lines that connect a motor to a frequency converter).

This article gives a brief overview on the planning principles for Ethernet-APL networks. Due to the length constraints of such an article, only the basic principles could be touched. Detailed information will be given in the Ethernet-APL Engineering Guideline [3]. There further information, including best practice examples, migration examples, installation instructions, surge protection and instructions for an acceptance test, will be provided.

In trend: ships powered by LNG

The use of LNG as fuel for ships is booming. The use of LNG means that hazardous areas will be present on ships which have to be taken into account with respect to the technical equipment. Ingo Emde explains what this means for you as a shipbuilder.

The hydrogen value chain is full of safety challenges. Find out what is important in explosion protection and what tasks the standardisation committees are yet to tackle.

Have you been asking yourself how you can access data via a digital nameplate? We'll provide the answer in this blog post.

To the blog homepage